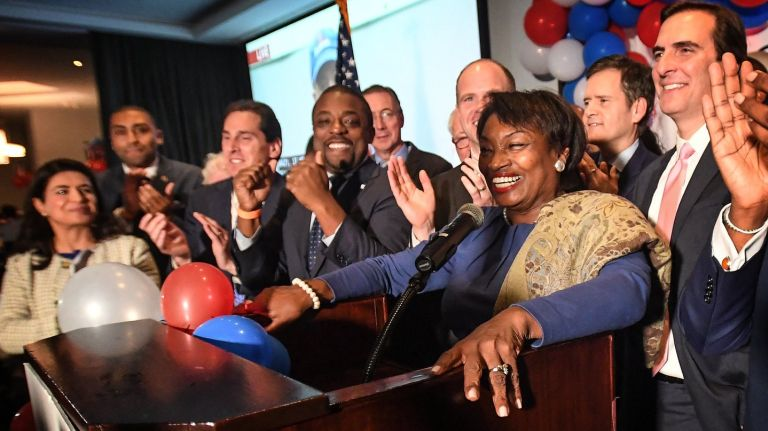 The Parkside Group congratulates incoming Majority Leader Andrea Stewart-Cousins on her momentous achievement.
Sen. Stewart-Cousins was first elected to the State Senate in 2006, following a decade of service as a Westchester County Legislator. During her tenure, Sen. Stewart-Cousins has authored and passed landmark legislation such as Westchester's first human rights laws, living wage laws, tougher gun laws, and laws that have provided tax cuts for seniors and veterans.  We know she will build a proud, progressive legacy in her new role.

Democrats won the State Senate with the largest majority in a century under the leadership of Senator Mike Gianaris, and The Parkside Group was honored to serve as chief strategists for the Democratic Senate Campaign Committee in this historic victory. We are incredibly proud of our hardworking team and DSCC staff, our wonderful partners in labor, and the tireless campaign staff and volunteers across the state.

We are thrilled to congratulate our clients who won election to the State Senate for the first time - the leaders who stepped up and changed New York: Senators-elect James Skoufis, Anna Kaplan, Jim Gaughran, Andrew Gounardes, Monica Martinez, Jen Metzger, and Rachel May. And we are proud to represent deeply respected officials who were resoundingly re-elected, including DSCC Chair Mike Gianaris; Congressman Tom Suozzi; State Senators John Brooks, Todd Kaminsky, David Carlucci, and Joe Addabbo; Assemblymembers Ed Braunstein and Brian Barnwell, and many others. Producing television and digital advertisements, direct mail and polling for so many inspiring candidates across New York was a privilege we at The Parkside Group won't soon forget.

We also wish to congratulate Governor Cuomo, Senator Gillibrand, Attorney General-elect Tish James, and Comptroller DiNapoli on their well-deserved victories.  New York has elected leaders up and down the ballot who will forge a new and better path forward, and The Parkside Group will continue to fight alongside them.